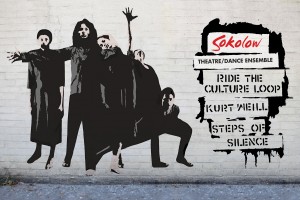 On March 9-13, the Sokolow Theatre/Dance Ensemble will present three major works by Anna Sokolow and the premiere of a new work by guest artist Rae Ballard. These theatre/dance works transport the audience through the breadth and depth of the human experience.

• Ride the Culture Loop (1975) captures the restless search for meaning among the youth of the 1970’s, veering wildly from inward contemplation to irrepressible exuberance.

• Kurt Weill (1988) depicts life during a time of crisis, in which a community of people still love, fight, struggle, and dream.

• Steps of Silence (1968) is Ms. Sokolow’s shattering vision of people denied their humanity; even more relevant today than when it was first created.

• In Rae Ballard’s We Remember, three women come together to support each other in the aftermath of a shared experience.

The Sokolow Ensemble, under the artistic directorship of long-time Sokolow associate Jim May, is dedicated to insuring that the works of Anna Sokolow, one of history’s most iconoclastic and original modern dance choreographers, are kept alive into the future. This season, the Sokolow works are being directed by veteran company members, and we have welcomed several wonderful new dancers into the cast.

The concert will be presented in association with the Dance Series at The 14th Street Y in New York City.

Theater at the 14th St Y

– tickets also available AT THE DOOR