“Choreography always reflects the character of the creator. We see in the person’s work what he asks from life and from art. Art should recognize all our needs.” 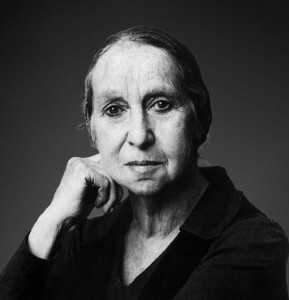 Anna Sokolow (1910-2000) was born in Hartford, Connecticut and began her training at the Neighborhood Playhouse with Martha Graham and Louis Horst. In the 1930’s she was a member of the Graham Dance Company and assisted Mr. Horst in his dance composition classes. During this period, in addition to her association with the WPA dance unit, she formed her own company and began choreographing and performing solo concerts and ensemble works.

Ms. Sokolow’s interest in humanity led her to create works of dramatic contemporary imagery showing both the lyric and stark aspects of the human experience. Her vast range of repertory includes drama, comedy, and lyricism with her commentaries on humanity and social justice threaded into each of her works. In a 1965 Dance Magazine article she wrote that there were no “final solutions to today’s problems,” but that she “could simply provoke an audience into awareness.”

In 1939 Ms. Sokolow began a lifelong association with the dance and theater arts in Mexico. Her work for the Mexican Ministry of Fine Arts grew to become the National Academy of Dance there. In 1953 she was invited to Israel to work with Inbal Dance Company. Following that, she choreographed for the major dance companies in Israel including Batsheva, Kibbutz Dance Company, and Lyric Theatre. She visited Mexico and Israel frequently to teach and to choreograph.

Ms. Sokolow’s works are performed by the Sokolow Theatre/Dance Ensemble, and are in the repertories of numerous other companies around the world.

Ms. Sokolow also choreographed for the Broadway theater. Her credits include Street Scene, Camino Real, Candide, and the original Hair. In the late 1950’s Ms. Sokolow was the first modern dance choreographer to have her work (Rooms) presented on national television.

Ms. Sokolow’s interest in teaching took her to universities, dance companies and acting studios throughout the U.S. and abroad. She was a longtime faculty member of the Juilliard School in both the dance and drama divisions. She received many honors and awards, including Honorary Doctorate degrees from Ohio State University, Brandeis University and the Boston Conservatory of Music. She received a Fulbright Fellowship to Japan, the Dance Magazine Award, a National Endowment for the Arts’ Choreographic Fellowship, the Lifetime Achievement Award from the American/Israeli Cultural Foundation, the Samuel H. Scripps Award, and the Encomienda, Aztec Eagle Honor (the highest civilian honor awarded to a foreigner by Mexico).

The Jewish Women’s Archive named Anna Sokolow one of their 2002 Women of Valor, in recognition of her contribution to Jewish and American life. Visit their web site to explore a multimedia biography of Anna Sokolow and other trailblazing Jewish women.

To find out more about Anna Sokolow’s life and work, visit our More Reading page.