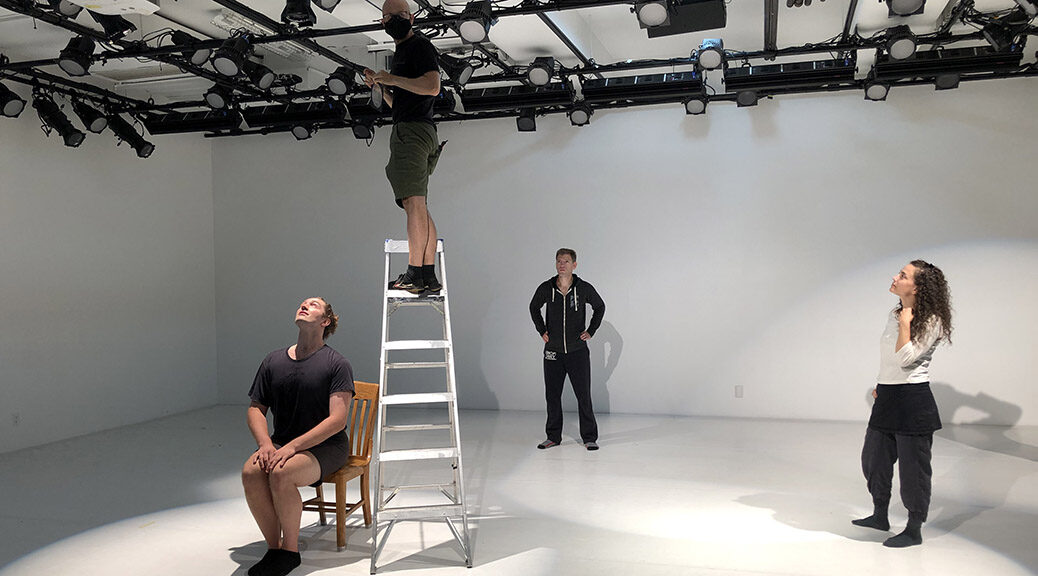 Our 2022 Season is taking shape and we want to share our plans with you. We are beyond excited to be performing in person again! Assuming current conditions hold, we will start our 2022 season this February in Madison, Wisconsin, joining Kanopy Dance at the Overture Center for the Arts. Our first NYC performances will be in late spring or early summer. We are thrilled to announce that we will be performing the beloved dance Frida and that Christine Dakin, the Martha Graham Company’s esteemed principal dancer and former artistic director, will join us to dance the title role. Additionally, next fall, we anticipate the opening of the Anna Sokolow archives at the Library of Congress.

You may recall that back in March 2020, we were readying our spring show featuring Rooms and Magritte, Magritte! This show was aptly titled “Real & Surreal”—though we didn’t know at the time that these words would soon describe our daily lives, not just Anna’s dances. Our 2020 season was a creative risk. Many of our dancers were relatively new, as we had been rebuilding since 2017, when the Trump administration choked off visa renewals and two of our dancers were forced to return to Thailand. After three years of building, we were ready for the challenge of performing two master works in one show. The Ensemble had been working very hard; it was incredibly difficult to consider cancelling the show. Ultimately, there was no choice: by mid-March New York City was shutting down.

By mid-April, our dancers were scattered across the country. Shaken, yet sure that dancing was going to be part of surviving this tidal wave of change, and trusting that Anna, prescient as she was, would have probed the depths of such uncertainty, we set our sights on dancing together via technology. The Unanswered Question was the dance that would ground us. A silver lining of our global tragedy then became apparent: given the reach of technology, we would be able to invite former company members, guest artists, and friends to perform with us—though for some it meant signing in at 3 am in their time zone. An international performance of The Unanswered Question occurred on April 27th, barely six weeks after learning of our spring performance cancellation.

Through mounting The Unanswered Question, we learned that simultaneous virtual performance was do-able and it was a joy for us dancers. But, from the audience’s perspective, there were significant limitations. Seeking a better match between performance quality and available technology, our next iteration of virtual performance was Rooms2020. We settled on some guidelines: each dancer would choose a room in their home; choose costumes from their clothes, and video themselves dancing. Eleanor Bunker, Lauren Naslund, and I became effective Zoom rehearsal coaches. Some hilarity ensued, of course. The last creative step was Lauren’s, who bent and blended the individual videos into a seamless—and novel—version of Rooms. The quality of the final product, Rooms2020, comes from someone with her artistic vision doing the editing. Rooms2020 aired in June and was given a This Week In New York Pandemic Award for “Best Long-Form Zoom Dance.” We are in good company in these Pandemic Awards; they include Alvin Ailey American Dance Theater, Molissa Fenley (for the Joyce Theater), Bill T. Jones, and Hope Boykin, to name a few.

“Art should recognize all our needs”

Rooms spoke ably to the experience of lockdown. This, coupled with our growing skill with coaching via Zoom, opened opportunities for the Ensemble while theaters and rehearsal spaces were closed. I wrote to college dance programs across the country, offering them a distanced learning experience of a Sokolow masterwork that spoke to the experience of a global pandemic. Many responded and we contracted to work with Ailey/Fordham; California State University, Fullerton; Kansas State; Loyola, Chicago; Southern Idaho State; Williams College; and also, the Kanopy Dance company in Madison, WI.

With Jim May as my sounding board, we processed what turned out to be a significant opportunity to watch today’s college-age dancers grapple with Anna’s powerful art. These young dancers were captivated with and drawn to her dance. They were moved by seeing that, as modern dancers, they were heirs to a tradition rooted in social justice. The dancers found Rooms far more revelatory than we ever expected, both the choreography itself and the experience of doing it. These deconstructed versions of Rooms provide an “on-ramp”—a dance equivalent to releasing the soundtrack to Hamilton long before tickets to the stage production go on sale. I came to see that this kind of inside experiences are very helpful to audiences, and we will continue to contextualize Sokolow’s work in these ways.

A Tale of Two Cities (or Radical Experimentation with Digital Technology)

As we were midstream with teaching Rooms to Kanopy dancers, Artistic Director Lisa Thurrell reached out. She had been told of a small summer grant. Could we propose something experimental? We could. For a cultural exchange grant, we had proposed to move beyond coaching sections of Rooms via Zoom to a full performance—with a twist. Sokolow dancers would perform their solos in New York and student dancers would perform group parts in Madison. Both would be combined into one live stream, thereby creating a single, synthetic performance of the whole piece with dancers performing in different locations. Kanopy took the risk, funded our work, and ROOMS, Live from Two Cities was made. It was exhilarating to be doing something so new that we couldn’t predict where the challenges would lie. Who would have guessed that the upload speed in Madison, WI would be faster than that of New York City? I was calling cues for two separate spaces while adjusting to two different upload speeds and allotting for the transmission of video across 1,000 miles. Luckily, there were no summer storms! And most joyfully, our small group was together in the Center for Performance Research studio in Brooklyn, before a small in-person audience.

Our recent past motivates our season plans. On February 18-20, 2022, the Ensemble will join Kanopy as guest artists in Madison’s Overture Center for the Arts, its premier performing arts space. In a program titled Reflections + Dreams, our two companies will perform Anna’s study of poetic yearning, “The Lovers” from Magritte Magritte! (1980), “The Pond and The Cage” and “The Unanswered Question” from Scenes from the Music of Charles Ives (1971), and Ballade, Anna’s rapturous 1965 lyric poem. After 18 months of isolation and loneliness, we exhale with the polyrhythm and polytonality of Ives’ forward-looking music and the wonder of young love. And, recognizing that exhaling and pursuit of justice must coexist, we are joined by guest artist Clarence Brooks performing Tally Beatty’s Mourner’s Bench (1947).

In 2022, we will also continue reaching out to new audiences and experimenting with digital media. In our next iteration of Rooms, we plan to dissolve its walls: we will project Rooms, piecewise, on buildings in the Bowery. Between dance sections, we hope to include written reflections of people who lived in the neighborhood during 2020. We’re in touch with a likely partner and have identified two potential grants.

This spring, we begin rehearsals for Frida. Choreographed when Anna was 88, Frida was Anna’s last dance, a tribute to her friend of more than twenty years. As Frida Kahlo’s posthumous reputation grew, Anna determined that her perspective of her long-time friend was missing from the greater narrative. Animating Frida is a sense of the artist having found the strength of her voice.

We are delighted that Christine Dakin will join us to dance Frida. Frida holds a special interest for Christine, as she, like Anna, has deep and longstanding artistic ties to Mexico. Moreover, Christine is drawn to exploring Frida Kahlo’s capacity to depict her physical pain and, through her art, through color and brush, transform her relationship to it.

One lesson since the shutdown for the Sokolow T/DE, is the importance of expanding our approach to dance venues. Exploring “deconstruction,” we plan to offer sections of Frida in some unexpected venues around the city. Margherita Tisato will dance Frida in some of these venues. Luis Gabriel Zaragoza, as Diego, will partner with both Christine and Margherita. While venues are being pinned down, one is certain: we will be showing excerpts of Frida in Robert Wagner Park, on July 6, 2022: Frida Kahlo’s 115th birthday.

Frida is a dance we need today on many levels. As we emerge from the isolation and destruction of the global pandemic, there are no simple answers to how we shall heal. Surely, finding joy and release is critical, yet, also, is a means to process our communal grief. Frida Kahlo harnessed the transformative power of art to allow us to face pain and grief.

Also, in Fall 2022, we look forward to celebrating the opening of the Anna Sokolow archives at the Library of Congress. This event will feature a lecture/demonstration and a showing of Slaughter of the Innocents, recently reimagined from 22 Barbara Morgan photographic proofs. Excitingly, Slaughter will premiere to a new recording of the recently unearthed, original Alex North score.

These days, we frequently hear the word “pivot” in describing dance companies who were nimble and adapted constructively to the pandemic. I’m proud that Sokolow T/DE is among those companies.

We look forward to dancing for you again in the theater. We also look forward to exploring our shared inheritance of Anna Sokolow’s art in all the media available to us—in-person; live-streamed events such as Christine Jowers’ interview with Danny Lewis or the National Arts Club’s evening on the wide-range of Anna’s work; hybrid performances; or films of Rooms projected on Bowery walls.

In closing, we want to say thank you for being part of our community and thank you for staying with us through these challenging times. Please be in touch; I welcome your insights and observations.