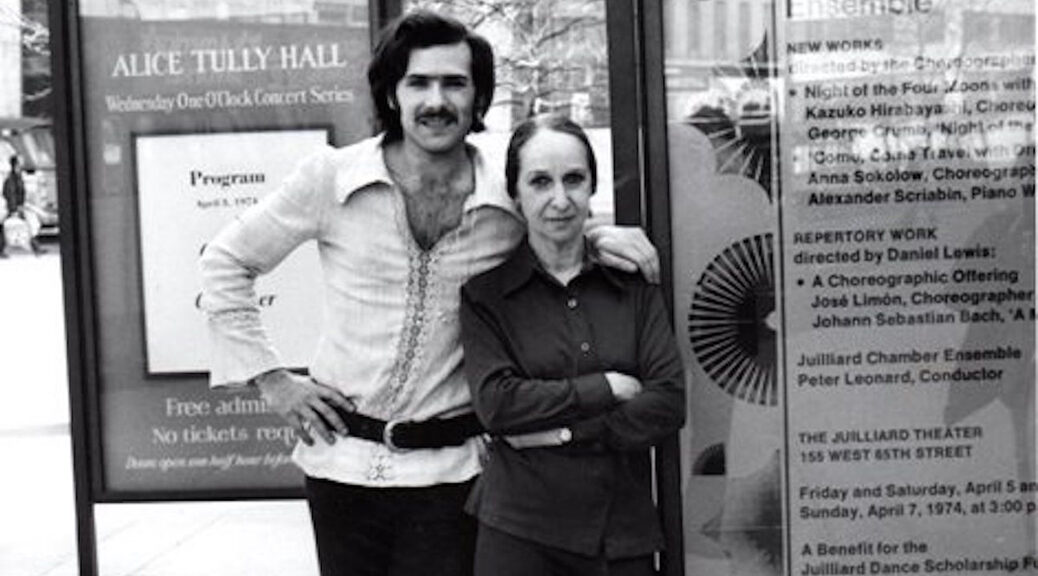 We are delighted to present this virtual interview with Dr. Daniel Lewis, hosted by Christine Jowers, founder and Editor-in-Chief of Dance Enthusiast. Dr. Lewis worked closely with Anna Sokolow for many years and shares his stories of his time with her as well as rarely seen footage. Recorded on April 17, 2021 at 2:00 pm EDT.

ST/DE Founding Director Jim May joined Dr. Lewis  and Ms. Jowers for a conversation following the interview, and answered questions from the audience.

Mr. Lewis is perhaps most widely known for his association with the work of Jose Limón. From 1962-74, he danced with the José Limón Dance Company, originating roles in A Choreographic Offering, Legend, Psalm, The Winged, Comedy and The Unsung. In 1975, Mr. Lewis completed the choreography of The Waldstein Sonata, an unfinished work begun by Limón just before his death.

As Mr. Limón’s assistant for seven years, Mr. Lewis staged the works of Limón and Doris Humphrey for such companies as the Royal Swedish Ballet, Alvin Ailey American Dance Theatre, American Ballet Theatre, National Ballet of Canada, the London School of Contemporary Dance, The Juilliard School, and the José Limón Company. In 1972, following the death of José Limón, Mr. Lewis served as the Limón company’s acting artistic director and in 1984 became founding director of the Limón Institute. Mr. Lewis’s book, The Illustrated Dance Technique of José Limón (Harper & Row Publishers, 1984), has been translated into German, Spanish and Japanese. Princeton Book Company released a second edition in August of 1999. In addition, the Technique Video or DVD, is available from Video D. He had two papers published, in Medical Problems of Performing Artists, in 1998: “Health Care for Dance Students at a Performing Arts Academy” and “Dancing with a Prosthesis.” He was Issue Editor for Dance in Hispanic Cultures for Harwood Academic Publishers.

As a choreographer, Mr. Lewis has been commissioned to create works by the National Endowment for the Arts, the New York State Council on the Arts, Dallas Civic Opera, American Opera Center at Lincoln Center, Amherst College, the University of California, Los Angeles, The Juilliard School, and companies in South America and England. His repertory company, Daniel Lewis Dance Repertory Company, known originally as Contemporary Dance System, performed and taught extensively throughout the United States, Europe, and Scandinavia for 17 years. The company performed the works of Mr. Lewis and other contemporary choreographers, as well as the master works of José Limón, Anna Sokolow, Doris Humphrey, Sophie Maslow and Lucas Hoving to name a few. Anna Sokolow was the resident choreographer for 15 of those years, creating As I Remember, a suite of three early solos, and a new full-evening work called Scriabin based on the composer’s music. Over her years as the resident choreographer, she staged and choreographed many works on the company. Her work Dreams was staged on the company, and in 1975 Anna reworked Dreams for the camera in the CBS television production of Camera 3 on the Daniel Lewis Dance Repertory Company.

From 1984-87, Mr. Lewis was Assistant to Martha Hill, the Director of the Dance Division, at The Juilliard School, where he had been a member of the dance faculty since 1967. Mr. Lewis was also an adjunct professor at New York University and a professor at Amherst College for six years while his company was in residence there.

He is currently on the boards of the Florida Dance Educators Organization, The Thomas Armor Youth Ballet, Arts for Learning and Miami Dance Futures.

Mr. Lewis graduated from New York’s High School of Performing Arts in 1962 and The Juilliard School in 1967. In 1990, the National Society of Arts and Letters awarded Mr. Lewis the gold medal for Lifelong Achievement in Dance. In 2001 he received The Florida Arts Recognition Award recognizing his outstanding initiatives, leadership and excellence in supporting the arts in Florida. In 2002 he received two awards, he was Honorary Chairman for “dance4life,” and received a Life time achievement award and was presented with the Nancy Smith Award, for consistently demonstrating outstanding leadership and excellence in dance in Florida at the Florida Dance Festival. In October of 2010 he received a Lifetime Achievement Award from the National Dance Educators Organization, In February of 2011, Miami Dade County and the City of Miami declared February 5, 2011 as Daniel Lewis Day. On April 6, 2011, he received a proclamation from the floor of the Florida State Senate for his work in the arts in Florida by Senator Anitere Flores. On November 28th He received the 2011 Martha Hill “Lifetime Achievement Award” in New York City. On December 14, 2012 Mr. Lewis received an Honorary Doctor of Fine Arts Degree From the University of Florida. Mr. Lewis received an Education Advancement Award from the José Limón Foundation on April 29, 2013. He received the Doris Leeper Award by the Florida Alliance for Arts Education (FAAE) in 2017. On March 10. 2019 he was Honored by Dance Now Miami at their 2019 Benefit for bringing the legacy of time and culture to South Florida. On May 11, 2019 he received the Trailblazer award from the downtown Dance Booster Club, for blazing the trail for dancers and art education that changed the future of the performing arts in Miami for generations to come.

He is currently the General Manager and treasurer of the Florida Dance Educators Organization, on the boards of The Thomas Armor Youth Ballet (president) and Arts for Learning and Miami Dance Futures (president), as well as teaching, choreographing, and staging his and Limón’s works around the world.

McFarland & Company is pleased to announce the release of:
Daniel Lewis: A Life in Choreography and the Art of Dance, co-authored by Donna H. Krasnow and Daniel E. Lewis.

Daniel Lewis’s legacy as a hugely influential choreographer and teacher of modern dance is celebrated in this biography. It showcases the many roles he played in the dance world by organizing his story around various aspects of his work, including his years at the Juilliard School, dancing and touring with the José Limón Company, staging Limón’s masterpieces around the world, directing his own company (Daniel Lewis Dance Repertory Company, with whom Anna Sokolow was the resident choreographer for 15 years), writing and choreographing operas and musicals, and his years as dean of dance at New World School of the Arts. His life has spanned a particular period of growth of modern and contemporary dance, and his biography gives insight into how the artistic and journalistic perspectives on modern dance were influenced by what was occurring in the broader dance and arts communities. The book also offers rarely seen photographs and interviews with many dance luminaries.

“Daniel Lewis’ autobiography is more than an important text of dance history; it reveals a unique glimpse into the world of American modern dance through the lens of his charmed and impressive career.”
Alicia Graf Mack, Director of the Dance Division, The Juilliard School

“Written by one of the great multi-taskers of American modern dance, this book is a unique blend of autobiography, a relatively unexamined recent dance history, and what goes into performing, choreographing and dance administration.”
Jennifer Dunning, dance writer for the New York Times, and author of books on ballet and modern dance

“Dancer, choreographer, teacher and visionary, Daniel Lewis has contributed greatly to an exciting era of American dance. This chronicle evokes some of the many fascinating people he’s encountered during a long and productive career.”
Jack Anderson, New York correspondent, Dancing Times (London); founding co-editor Dance Chronicle; and contributor to New York Times and other publications

Order an autographed copy of the book at krasnowlewisbooks.com.

Support the Sokolow Theatre/Dance Ensemble by shopping at